Amitabh Bachchan defies description. We’ve read and written so much, apocryphal exaggeration and gossip combining with lanky fact and box office numbers to make up the myth of the megastar, that none of us knows exactly what to believe. I’ve interacted with Mr Bachchan on a few occasions, coming away with strikingly different impressions each time, deciding that — be he moody, difficult, overwhelming, prompt or affable — the much feted B, the Big one, must stand for Bewildering.

It is said, however, that the only way to measure a movie actor is to see him closeted by cameras, forced to perform, giving the scene his all.

And thus I wait. It’s a sultry day in Hyderabad’s massive Ramoji Rao Film City as I shuffle around outside a closed set, waiting for Bachchan and Ram Gopal Varma, who’s directing the star — and his son and daughter-in-law — in the Sarkar sequel, Sarkar Raaj. It isn’t too hard to find the set: you take a right near the fake railway station, and the Film City security guards are most helpful. ‘Amitabachchan,’ they repeat as one word, pointing you along. There is little of the Mumbai security madness or the hysteria — though possibly a Chiranjeevi-garu film might garner a lot more mob-security in these parts.

Krishna Prasad, KP, one of Ramu’s many youngling Assistant Directors, last worked with The History Channel on a show called Sharpe and with Wes Anderson on Darjeeling Limited, the hush-hush production the Rushmore director wound up before the Indian media could trace him, and I’m being regaled by tales of Bill Murray’s meteoric temper when the Sarkar director arrives.

Ramu’s in sunny mood, dressed in a lilac shirt and sporting golden highlights in his hair. He likes Hyderabad, he says, a lot more relaxed, while Ramoji has a great setup. “Plus, it was raining far too much in Mumbai, it kept disrupting the shooting schedule.” So, as I discover following RGV onto the sets, Sarkar’s quintessentially Mumbai bungalow has been recreated right here.

And while cameras are currently trained for a living room shot, the outsides hold the fascinating bit. Massive floor-to-ceiling blowups surround the building, flat photographs of palm trees and traffic — it’s hard to imagine that when seen by well-lit camera, this wallpaper-style façade can look convincingly deep, but as I soon realise, it does perfectly nicely. Well, well.

As the lights are readied, ADs jump into room for the stars. A tall longhaired youth tries hard to keep a straight face as the cameras focus onto him as Sarkar, and it’s decidedly surreal to hear the words ‘Sam is Aishwarya’ as yet another hapless neophyte fills in. Other senior actors – Govind Namdeo, Ravi Kale, Shivaji Satam — take their positions, cooling their heels. Bachchan, for whom the shoot is standing still, is late by at least ninety minutes. 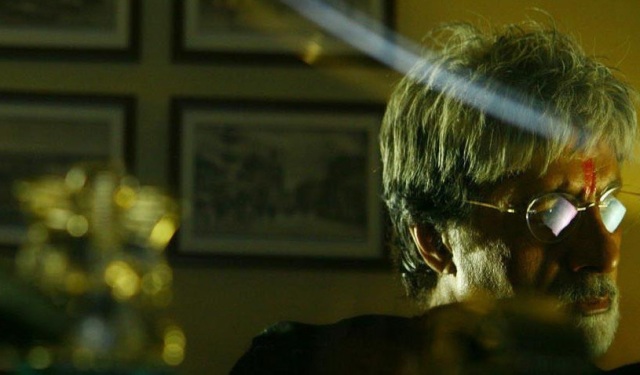 The wait is shattered with the confident squelch of leather against thin wood. The sets seem to reverberate with the sound of kolhapuri chappals taking long, tremendous strides as they head directly to the spotlight, dead center. In Sarkar garb walks Bachchan, other actors smiling politely and leaping over each other to move out of his way. Amitabh smiles at Ramu, gives the cameraman an encouraging pat on the shoulder, and instantly slips into his role as white-haired, black-kurta’d Subhash Nagre.

Meanwhile, Abhishek and Aishwarya have meekly come in, their entrance appropriately low-profile. In a flurry of makeup-men they stand patiently, their noses powdered and suits checked for the faintest hint of a crease. Both wear dark suits, Abhishek taking his jacket off to reveal a stark white shirt with black thickly lining the nearly-flared collar and cuffs. It’s restrained yet has a retro touch to it. Ash’s shirt is shiny, well-fitted and steel grey, and the actress looks watercolour-perfect.

Each shot ends up meticulously planned, though that assembly seems to be taking place quite ad hoc, on the sets rather than before. It is clearly no picnic to be RGV’s cameraperson, the domineering director staying away from behind the camera only in name, but controlling the shot entirely. Ramu sits with a monitor and cordless microphone, and grunts instructions to his cameraperson, right down to the minutest detail. ‘Amit,’ he says to longtime cinematographer Amit Roy, the lack of ‘ji’ separating these conversations from those with the megastar, ‘Zoom in, tighter, tighter. I just want half of Abhishek’s face showing, yeah, that’s it. Now hold it, now zoom out subtly. Cut.’ Whoa.

It’s a fascinating wooden wall to be a fly on. The scene involves Ash, apparent embodiment of ruthless capitalism, coming to see Sarkar, a couple of politicians (one for, one against) alongside. Interestingly, RGV uses a one-camera setup and shoots the scene several, several times, from bizarre angles – from Aishwarya’s shoulder, from Shivaji Satam’s plate of food. Ramu clearly likes his camera to brood on these characters, tight close-ups and expressions lingering way beyond the minimal dialogue. Then again, he’s likely to edit them with great economy, for maximum drama. Though one wishes he’d leave it like this, moody and dark.

As the shots continue from a plethora of angles, it is clear that Ramu’s concentration is solely on the framing. He scarcely adjusts the lighting, comfortable in shadowy darkness and fountains of smoke, and treats instead his actors as mere props. Experienced theatrical hands like Namdeo and Satam do not need over-direction, and RGV dwells instead on the physicality of it all. ‘Govindji, look up but don’t close your eyes,’ ‘Amitji, raise your hand just two inches higher the second time.’ The precision is obsessive as he obtains startling frames — compelling viewing even on a tiny monitor.

Despite all talk of the legendary performer, Bachchan is an awesome revelation. Instantly breathing his character, even his outtakes, the ones abruptly cut short by somebody else fumbling a line or the cameraman not panning right fast enough, are magical. His voice is gruff, yet modulated, his eyes alternately flashing lament and fury, and it soon becomes clear that this film is going to be a series of Amitabh-moments, wisely constructed around him.

Amitabh’s style is effortless. He doesn’t speak much on the sets, seems completely in character, and goes and knocks it out of the park, every single time. It’s stunning, and likely a great challenge for any director to try and utilise him to the optimum. Often you sit at the monitor distracted by Bachchan instead of following the scene itself, and these are times when he himself says “cut,” stops the shot and tells the director where he thinks he went wrong. “My pause should have been much shorter, Ramu. Sorry. Let’s go.”

Bachchan’s yell is to no one in the room in particular, yet galvanizes the entire crew into action. He wears authority lightly on his shoulders, obviously used to reigning over awed crowds. There isn’t arrogance really, but — as if the Sarkar role is for real — the man is a no-nonsense patriarch. Of course, there are times when he lets the mask slip. When Govind Namdeo nails a scene with hilarious perfection, and an exultant Bachchan revels in the replays on the monitor, applauding warmly and laughing, loud and infectious. And when the exhausted 64-year-old slips silently onto a chair right next to me, and instantly nods off for a solid half-hour between takes.

The rest of the time, he’s megastar — or dad. Abhishek puts up a play of defiance, mock-fury to keep the crew amused. And there are times when he does this with élan, like when he asks an overworked AD to find him the right scene, and repeatedly demands ‘the porn scene’ because he’d rather shoot that first. Confused as hell, the young man combed the script thrice over. The rest of the time he saunters sulkily around the sets — an intelligent act, really: one can’t tell real-life arrogance from the put-on bits — and once comes close to getting his feet entangled in camera wires. “Abhishek,” the baritone booms, without even looking up, “Watch where you’re walking.”

And then there’s his startlingly attractive bride, who Ramu shoots very well indeed. She seems slightly out of her depth among several seasoned actors, but RGV knows when to keep the focus on and off. And to give her credit, she looks ready to be pushed. Frequently in conversation with Ramu, the actress looks assured, confident and, well, very attractive indeed. There’s a warmth even to her laugh — induced instantly by Ramu singing an NTR song that sounds, to my philistine ears, like “giti-giti-giti-go.” The giggling is instant, and grin-provokingly real.

The actress laughs and listens while the shots are being set-up, talking mostly with the director and Bachchan, Sr. When next to her husband, they seem comfortable and less chatty — perhaps aware of watching eyes. There is a long conversation about makeup-men, Amitabh explains that they get the brunt of the actors’ frustrations. “Because when the mirror’s in front we aren’t looking at ourselves, we’re trying to remember the lines,” Amitabh elaborates. Aishwarya agrees, talking about the need of the right makeup-man. “And sticking to him forever.”

Even when amused, Ash has a way of looking at you, keenly, inquisitively, as if daring you to stay in her presence — or at least silently demanding that you explain why you’re four feet away from her. There’s a silent moment when you’re struck by the glance, and fervently hoping that the queen doesn’t ice over. Then Ramu croons another “giti-giti-giti-go,” and the laughs inadvertently strike back.

I spend two days on the sets, two days replete with moments. When Abhishek breaks into an irrepressible — and understandable — chuckling fit as the stand-in AD tries, vainly, to mimic his father’s voice to give him an off-camera cue. When Amitabh Bachchan has a surprise visit from best friend and Samajwadi Party MP Amar Singh, and his real-world politico bodyguards are overshadowed by the filmi goons preventing you from harming a single white Sarkar hair. When plans are drawn up to go watch Sivaji, and admiration is expressed for Rajnikant.

But all in all, this is Ram Gopal Varma’s show all the way, the filmmaker showing off idiosyncrasy without even trying. There are times when he’s so busy with his phone that he types and sends an SMS even as he yells ‘action,’ almost as if he doesn’t care about the shot. Or as if he thinks it can’t go wrong. Or times when he insists on innumerable retakes just because he hasn’t gotten the shot just right.

And when he does, at a rare moment when Ramu is actually convinced the shot works, he breaks into an ecstatic, invincible grin. The shot, in a hospital room, features Abhishek walking in and standing against the light, aligning himself with a slight stant against the hospital bed, a few feet away from Amitabh in a deep chair. After many attempts, the shot falls into place and the light and frame is just right.

Before asking for the cut, Ram Gopal Varma looks around, eyes a-twinkling, and whispers, “this shot’s good enough for the promos.”