The inherent flaw with the Bollywood rom-com template is that it doesn’t bother fleshing out characters and making them real, relying mostly on music and chemistry to do the job instead. Which is why we mostly end up with vacant films about pretty people conveniently positioned close enough to fall in love, which they do over several cutesy montages.

Why does she love him? What are they talking about, or bonding over? Who cares, say the filmmakers, see how great they look together as they laugh, as we fade from her punching his shoulder playfully to him making a silly face, all as the music takes turns being playful and mushy and nostalgic. Clearly, the film tells us, these people are in love — ‘oho, why else would they have a song?’ — and we’re just supposed to accept that and see what happens next.

This is why it’s wonderfully refreshing to discover a film as solid as Maneesh Sharma’s Band Baaja Baaraat, a seemingly simple romance which actually makes us care and root for the protagonists. Where the boy is mongrel-rough and the girl is perky-plain, but the relationship they share is relatable and real and worth many a smile. It’s a full-blown Bollywood entertainer, sure, but one with as much smarts as it has heart.

Writer Habib Faisal impressed earlier this year with Do Dooni Chaar, and here as screenwriter he strikes again, creating a flavourful slice of Delhi that makes up in sheer earnest enthusiasm what it lacks in accuracy. Yet the milieu isn’t the film’s strength — clearly Dibakar Banerjee has inflicted a Sai Paranjpe-like love for the capital city among current filmmaking brethren — nor is the story, though it does have some neat little nuances.

The decidedly irresistible characters meet at a buffet line in a shaadi — him scavenger, her custodian — and it is initially impossible to imagine a girl so in-control even entertaining conversation with a lout so scruffy. She seems inappropriately uppity, he overtly out-on-a-limb. And yet they both make sense, as people. As a couple of unlikely, ambitious nuts with enough can-do to make it big. Romance is the last thing on their mind as they share a bed, him watching late-night TV, her coiled comfortably into herself. 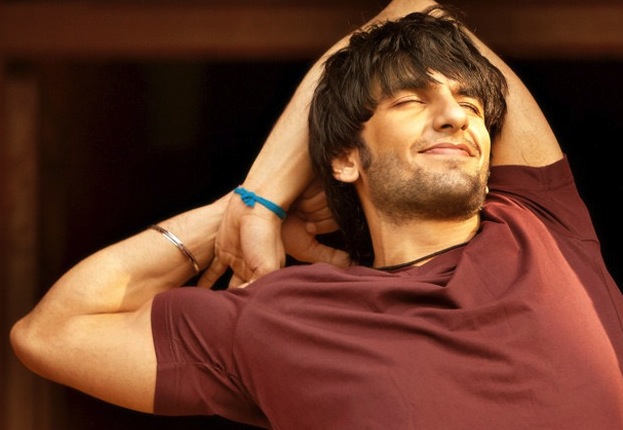 There is a hair-saloon style painting of a Bollywood actor outside their office, Amitabh Bachchan’s Vijay looking more dour than usual. Sometimes in the dusk-stretched shadows, he looks almost like Hrithik. Neither looks like Ranveer Singh, who plays Bittoo Sharma, a wonderfully unsmooth leading man. He isn’t in any way traditional, but it’s hard not to get swept up by his dogged, unpredictable enthusiasm. You root for him, hard.

Anushka Sharma, harmlessly likeable in Rab Ne Bana Di Jodi and atrocious in Badmaash Company, is perfectly cast here as Shruti Kakkar, creating a character with both pluck and pout. They are smashing protagonists, and while each gets some photogenic time, that’s not the point. It’s about love, not the stars, as Bittoo tells a bride sobbing over SRK unable to dance at her wedding finale.

That this message comes from the country’s starriest banner is welcome news indeed. As is the fact that it has churned out a bonafide romance, a realistic tale of ambition and rules and morality, one that is both progressive and modern but intelligent enough to not rub our noses in it.

Even the final speech — that staple of romantic comedies worldwide, the maudlin soliloquy that redeems one protagonist while showing the other the light — is here handled deftly, talking about love as lifeforce, as spirit, as enjoyment. As Mauj. Excellent.

When things look bleak for our heroes in BBB, actor Manish Chaudhary conveniently comes to the rescue, like he did almost exactly a year ago in another great early-December YRF release, Rocket Singh: Salesman Of The Year. Now, the Manish Chaudharys of the world might not be as easy to stumble upon, and business might not be quite as easy to excel in as YRF shows us, but at least the dream they conjure up is one worth fighting for. And applauding.

2 thoughts on “’tis the season to be jolly”