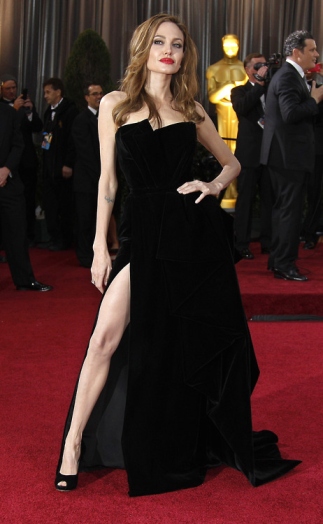 Black dresses don’t have to be little when you’re Angelina Jolie. It was a particularly predictable and soporific night at the Oscars, when Jolie walked across the stage, her infamous lips red like a messily fed vampire, her right leg imperiously showing through a black Versace dress with a slit so high it looked slashed by an indiscreet samurai sword. Beaming ear to ear, she took the microphone and thrust out her bare leg, left hand on her hip like a comic-book superheroine. Jessica Rabbit would have trouble competing as Angelina held her pose, basking in the fact that she made us all hold our breaths. And so it was that Angelina Jolie, who did not appear on screen in all of 2011, conquered the Oscar telecast – and she did it with one leg.

The amazing thing about Jolie and her ‘come look at me’ act wasn’t the right leg itself (spectacular as that was) but her overwhelming, impossible confidence, the sheer larger-than-life aura she radiated, the ridiculous entitlement with which she breezed in and decided to own the room. And what a room to own. One can’t be trained to become a screen goddess, and no matter what you may think of her, there is only one Angelina Jolie.

The multitalented Michelle Williams is one of Hollywood’s most thrilling actresses, and her work in My Week With Marilyn is extraordinary, a sensitive and vulnerable portrayal of a week in the life of the most iconic woman who ever lived. It is a dazzling piece of acting, one true to the film’s spirit and one that impresses consistently. Except Williams is not Marilyn, and that difference – that difference she cannot be blamed for – sneaks in and lets the air out of the painstakingly inflated balloon. Just last week I watched The Prince And The Showgirl, the 1957 film Monroe made with Laurence Olivier, the making of which is featured in My Week With Marilyn, and the gulf between the two is too massive. At her strongest moments, Williams is a lovely caricature; at her weakest, a poor mimic. It is an inevitable comparison, especially since the new film chooses to include scenes of the old film, and Williams, pretty, vacant Williams, pales in comparison to that sexiest of goddesses in cinema’s pantheon, one who can’t be replicated.

It’s exactly like watching the electrifying James Franco – so sublime at playing Allen Ginsberg – utterly fail at being James Dean.

Meanwhile, the indefatigable Meryl Streep – the lady the Academy nominates by default every year and then fills the four remaining slots on the ballot – played another iconic woman, another woman impossible to forget. The Iron Lady is a significantly flawed film, but Streep’s performance is a work of chameleonic grace, as well as much more. Her Margaret Thatcher is ambitious, self-serving, ruthless, overachieving and yet, like the most memorable of movie monsters, capable of drawing out whatever sympathy we have to give. Like with James Mason’s Humbert Humbert in Stanley Kubrick’s Lolita, or Frank Langella’s Richard Nixon in Frost/Nixon, we are awestruck by how an actor has taken a real-life personage we have been conditioned to loathe, and yet won us over. And Streep does it beautifully.

Williams gives her all to the part, and is most impressive. Yet Streep, who rightfully beat her for the Best Actress Oscar, had the fight in the bag all along: after all, Maggie Thatcher never stood atop a subway grate and let her dress fly up.

2 thoughts on “Conquering the Oscars, with one leg”