In a perfect world, this film would have been called (Unending) Days Of Samar.

A bomb defusal expert who embraces fatality on a daily basis hoping he’ll be blown to smithereens, Major Samar Anand is a stubbled Aviator-clad army-man who seems to like nothing better than tight black tee-shirts and singing folksy Punjabi songs in his quiet-time. And yet death, like a taxicab at rush hour, isn’t easy to find when you want it. When you don’t, on the other hand, it’ll come along and bowl you right over. 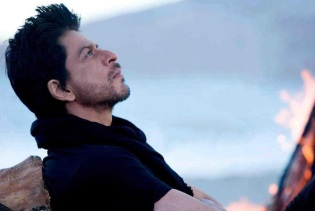 That, in a nutshell, is the whole point of Jab Tak Hai Jaan, a Yash Chopra drama that treads very familiar territory slickly — and a fair bit too slowly — but does so with an old-world sincerity that somehow makes most of it bearable. Rather like its leading man, who is often made to balance entire scenes on his dimples, grinning so wide his eyes appear closed. There are times in Jab Tak Hai Jaan when it’s hard not to feel embarrassed for Shah Rukh Khan having to work with material this tedious — and yet he, despite the exaggerated show of youngness, manages inexplicably to charm. This is his film, and, against all odds, he works it well.

We open with his Samar — first-name on badge, unlike any of his awed onlooking Army peers — clinically disarming a bomb, then riding off through the hills on an Enfield and reading from a leatherbound journal. Loner. Got it. Then, as if enough time has been wasted on fatigues, Anushka Sharma emerges, strips off her clothes and plunges into the river, a course of action which thankfully leads away from her incessantly shrill character and heads toward Khan and Katrina Kaif.

Chopra always had a thing for the most luminous of heroines, and the exquisite Kaif, with her neo-classical face and her immaculate bearing, is clearly and unsurprisingly the girl this film centres around. Her Meera is a rich girl living in a caricatured London — where even saucy dancing waitresses speak with a Hogwarts accent — who spends her life earnestly bribing God with personal sacrifices: chocolates, fur coats, cigarettes. Khan, now a busker who wears checkered shirts and moonlights too much, agrees to teach her a Punjabi song if she teaches him English. Like a Lord, he says. She giggles.

Sure enough, her warbling is soon sloppily dubbed over with genuine vocals, while Khan’s looking decidedly dapper in a tux. She’s taught him how to say Salmon; he’s made her forget how to pronounce Roger, the name of her fiancé. Trouble is predictably around the corner. Oh, and somewhere in the middle of all these lessons, Katrina’s learnt to dance, and this she does with such fluidity in an instrumental segment that it genuinely appears improvised. Even Khan, the most spirited dancer in our cinema, takes a backseat.

Borrowing little moments and ideas from many a Yash Chopra classic, this one plods on interminably, taking its time to tell us that every romance has to wait its turn. And clearly so must every intermission. The director, in a charming interlude, justifies and almost celebrates the idea of sincere, passionate infidelity, but soft-pedals drastically, as he picks one of our all-time warmest and most iconic on and off-screen couples for the job.

Despite his very name evoking a pleasant season, things soon get messy for Samar Anand. On one hand is a naive girl who believes in a vindictive god, and on the other is an overachieving girl with daddy issues. The latter, as played by Sharma, overacting to the hilt, is intolerably painful. I wanted to hurl something at this ridiculously hyper-chirpy thing, though something perhaps less cruel than Chopra’s obvious step-daughterly treatment of her character, dressing her in bottom-flattening jeans and making her appear a complete dolt. And while Anushka can indeed play spunky, she needed here to tone it down several notches.

As did Chopra who, after a while, abandons all reason. Two London cops look at a bomb on a train, a man who refuses to identify himself shows up and bizarrely starts spouting specifics (about a bomb he can’t see), and they step conveniently aside with a “maybe this guy knows what he’s talking about.” We don’t look to a 183-minute melodrama for subtlety, but stuff like this is hard to look past. Especially when it is so easily fixed.

Katrina is the film’s big surprise, providing a solidly competent performance in a role that could well have been reduced to farce. The lazy screenplay makes sure she kisses more than she gets to speak, which isn’t a bad thing because she turns out pretty good with the silent moments. The actress brings a tenderness to the proceedings and emotes strongly, making sure her character — while unlikely, untimely and irrational — ends up real enough to root for.

And yet it’s not her film. Or even Yash Chopra’s, really. Jab Tak Hai Jaan is all Shah Rukh, all the time. His character seems larger than the film, and Khan himself is in fine form even when the script deserves far less. There are times he seems out of place, certainly, but these are made up for by times where he grounds the narrative with one glare, with one scowl, with one kiss. The dude abides.

As a swan-song for the master director, Jab Tak Hai Jaan might only be a middling effort. But then, sometimes, all we need is a Khan-song.