Twenty minutes into Dhoom 3, reeling from the assault of cinema so amateurish it’s hard to believe it was put together by grown men, I began to ask myself precisely what this film was trying to be.

There was an annoying kid borrowed from the melodrama of Subhash Ghai movies, complete with a moist-eyed Jackie Shroff. There were the cheesiest of dialogues, Kader Khan in Dickensian mode. There were stunts seemingly executed in slow-motion and shown to us even slower, resulting in yawnworthy chase scenes. There was Aamir Khan running down the side of a building for no apparent reason. Everything — repeat, everything — looked too goofy to be either thrilling or realistic or compelling or even plain fun.

And then it hit me. Dhoom 3 is a children’s film made for children who’ve never seen a film.

How else can you explain this famine of originality? How else can you possibly justify the lack of a single interesting scene right up to the intermission? And how, after that, can you account for Aamir Khan’s blatant exploitation of yet another Christopher Nolan masterpiece that the actor (by his own admission) doesn’t understand?

Look here, I liked the first and second Dhoom films. The first was brisk enough to breeze by, the second was sheer masala but presented well, an utterly preposterous but very good looking film. The reason I’ve been looking forward to this film, however, was the fact that I was one of the half-dozen people on the planet who actually liked the director’s first film, Tashan. All I wanted from Vijay Krishna Acharya’s third installment, then, was a film that made like a firecracker and went boom — even if it didn’t make sense.

But this is a Christmas debacle.

We start with Chicago in the year 1990, though it may as well be a hundred years ago. An old magician (Shroff), his labrador-brown eyes eternally wet with tears, runs a circus housed in a massive structure the size of the New York Public Library. The bank moves in to cut off his loan and Shroff, instead of perhaps leasing out the place and moving to a humbler venue, decides to kill himself. For how dare the evil bankers remain unmoved by his clown-nose wearing son?

American police seem ill-equipped to handle things (The Rock must have had the month off) and thus, naturally, help is imported from back in India. Where Uday Chopra’s Ali spends several minutes talking up his boss to goons — in “Don’t you know he’s Dirty Harry?” vein — before the aforementioned boss shows up flying through the air in an auto-rickshaw with stickers of Salman Khan films optimistically on either side.

Abhishek Bachchan’s Jai Dikshit seems a nice enough fellow, if somewhat surly, but happens to be a remarkably incompetent police officer. (I mean, if not from Dad, at least take some pointers from Iftekhar Uncle’s movies, Abhishek?) Here’s a fellow who, when he traps a fleeing motorcycle on a bridge, helpfully tilts it up to offer the fugitive a convenient ramp. The rest of the time he scowls.

Ah, and then there’s the girl. Apparently all the “hot Asian ladkiyan” in Chicago have been auditioned for Khan’s Great Indian Circus act but none has enough “liquid electricity,” whatever in innuendo’s name that means. Enter Katrina Kaif, all stuntwoman-flexible and whippety hairdo, looking like a million bucks and speaking, disconcertingly enough, like a twelve-year-old.

The rest of the film is, essentially, a dumbed-down version of Christopher Nolan’s The Prestige, arguably the greatest movie ever made about magicians. Aamir Khan, who claimed Ghajini was a great story but that he didn’t understand Nolan’s groundbreaking Memento, will probably say some such about this bit of shameless pilfering as well. Oh, and he uses a Joker sign too, to boot. (I can already picture ambitious young screenwriters lining up outside Khan’s bungalow with easy-to-understand song-filled scripts titled Sapne Mein Sapna.) 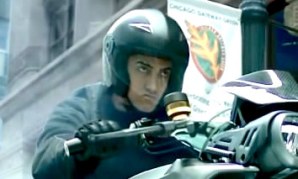 The other thing in this film is The Face. If you’ve seen the trailer or the songs or the posters, you know what I’m talking about. It’s the perplexingly weird expression Aamir sticks onto his face throughout, and the smugness with which he wears the A-Face makes me wonder if we’re all — inadvertently and inescapably — seeing his vinegar strokes over and over again. If we’re eskimo brothers now, Aamir Bhai, must say you messed up. Big time.

Not that Khan’s acted badly. Oh no. Outside of The Face, he’s pretty solid and has the charisma to power this film through, especially when he’s being all summery: i.e. all cutesy smirks and grins and chortles, a happy part of his repertoire the actor seemed to have left behind awhile ago. He also deserves credit for being a massive superstar who has agreed to look, occasionally, like an Oompah-Loompah; he’s been shot most unflatteringly. It is purely because of Khan that the (three) dramatic twists in this movie have any heft at all, but even he can’t help the vacant nothingness that engulfs the script before and after those stray moments.

But, you might persist, having already bought into the exorbitantly priced weekend tickets, aren’t the stunts good? Or IMAX-worthy? Well, the locations aren’t bad. It’s mostly shot in Chicago, and some of the vistas used as backgrounds for the bridges look pretty awesome. The stunts themselves, however, are both pointless and badly edited. Khan’s bike (which is a Transformer™, for some reason) is flung around excitably enough but hurling action figures isn’t the same as choreographing an action set-piece. So much time is spent in slow-motion, and so long do we linger on each shot, that the chases appear sluggish. There is no sense of urgency. At one point stationary police cars randomly start to do cartwheels, perhaps only to indulge Acharya’s inner Rohit Shetty. Like I said, if your child doesn’t know what movies are, he might be amused. For a bit.

The trick, of course, is on us. Shroff might have called his act The Boy In The Box, but producer Aditya Chopra goes one better, knowing we’ll show up to watch a Dhoom film if only to laugh at it. This time around, Aamir’s The Boy In The Box Office.