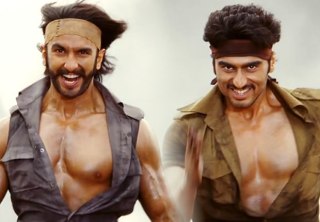 Gunday is the sort of film some people may mistakenly call a bromance. There is, however, nothing bro-tastic at all about this loud and slow-motion actioner, a film that tries hard to be old-school but proves only that its makers need to be schooled. This is, as a matter of fact, a more blatantly homoerotic film than any in our history. If you’ve played a little nudgenudgewinkwink at Sholay subtexts, your mind will explode when the Gunday leads — with coaldust blown into their faces by a guy about to kill them — look at each other and… well, pucker.

That’s right, these two are always on the verge of jumping each other’s bones. Chests shaven, oiled and heaving — in sickeningly slow-motion — Ranveer Singh and Arjun Kapoor consistently look at each other with maddeningly lusty eyes. Theirs is a physically demonstrative friendship, to the extent that whenever Ranveer hugs Arjun he sinks his face into the nape of Arjun’s neck, and when they are both aroused by the sight of Priyanka Chopra inserting herself into a classic song, the sexiest in Hindi film history, they feel the need to immediately hold each other’s hands. It coulda been a progressive film if it wasn’t constantly trying to call itself macho.

They could have called it Gun-Gay but that’d mislead us into believing this could be a quieter film.

Not so, ladies and gents, not so. Director Ali Abbas Zafar has directed a monstrous film, one with a repellent 70s-set storyline that makes no sense whatsoever, and a cast who should all hang their heads and offer up a minute’s silence for assaulting their respective filmographies. This is garbage.

Now, some of the films of the 70s and 80s — those loud and over-the-top actioners with wicked zamindars and wronged fathers and disabled mothers and avenging heroes — were trashy as hell, but they added up. They had solid, meaty plots and, more importantly, they had really good actors as villains being defeated by the likes of Amitabh Bachchan and Sunny Deol and Sunny Deol’s dad. These were men with great presence facing off against solid actors who made careers out of being evil, and the meaty plot — the twists and turns of which would always take more than a few lines to summarise — only made them more fun.

This has none of that, with a plot thinner than sliced cheese, hacky characters and actors who don’t know what to do with themselves. Ranveer and Arjun essentially play a couple of gangsters — and very repressed men in love with each other who get off seeing each other do Baywatch runs — who find everything going for a toss when a heroine walks in on them with their dhutis up. Neither is in love with the girl, but both overcompensate, playing a game of chicken as they clinch each other tighter. That, in a nutshell, is all there is to it.

Meanwhile Irrfan Khan, who apparently gets paid pretty good money for films these days, does his bit and says a few lines and makes them count. He isn’t around much, but if bilge like this helps actors like him make a buck, long may he spend counting out his money.

Naturally, the two idiots fight over the girl. And it is in the film’s asinine second half, where they stop embracing and start yelling at each other, that it becomes clear these aren’t heroes at all. They might be the best looters of coal this side of Dhanbad, and may have amassed a fortune — wealthy enough to buy anything but shirt-buttons, clearly — but these are two villains in the lead roles, two villains lacking the charisma to be the main baddies. Basically, we’re seeing a three hour film featuring the kinda guys who’d take orders from Sadashiv Amrapurkar or Amrish Puri to go get biffed by Sunny paaji.

Somewhere in this mess is Priyanka Chopra, looking like a bobble-head and making about as much sense. Her commitment to the part is in the way she sashays, and while she delivers most dialogues better than the boys, she’s given a maddeningly inconsistent character. At one point when pushed onto a pile of coal, she falls down straight but in the next shot is lying on her side with her butt stuck out, possibly in the hope that she can Rihanna her way out of a graceless film. (Spoiler: She can’t.)

The film starts off weak, with accidentally fun moments every now and then — the only one that stayed with me involves Pankaj Tripathi stretching out his arms in a Shah Rukh Khan pose after being shot — and we begin with a couple of annoying kids who refuse to grow up. That Bachchan-defining shot, of a child running and kid-legs turning into Amitabh-legs as the camera pulls out, finds many echoes here, but despite many slow-motion opportunities, the running kids exasperatingly enough stay running kids. That’s about the only suspense in this film until the two leads finally appear, Ranveer’s nipple bouncing alarmingly, as if it’s been paid extra.

Everything goes further downhill from there. These are protagonists who wear white pants with red hearts on the bottom, and yet this film doesn’t pick up on opportunities for irony or kitsch. Calling it a throwback seems insulting enough; imagine the Once Upon A Time In Mumbai films without Ajay Devgan, Emraan Hashmi and Akshay Kumar. That’s what Gunday is. And Ali Abbas Zafar should have his directorial license revoked for daring to end this godawful film with a Butch Cassidy And The Sundance Kid finish.

Rating: Half a star