The thing about spiders is: We don’t like them. Either creepily hairy or disconcertingly spindly, they refuse us even the common decency of being stealthy, commonly wallowing in out discomfort as they slothfully crawl in and out of sight. Their web spinning abilities, while nothing short of awesomely miraculous, strike us, at best, as icky. A testament to their unpopularity can be seen even the popularist Disney universe — where unsavory creatures are given the chance to blossom into heroes, arachnids are singled out as mustachioed villains. The magnificent, unparalleled symmetry of the web is unfairly, undeniably, shadowed by the perception of the spider as icky.

Herein lies Peter Parker’s essential dilemma. Straddling dual lives, each of which is a full, hectic battle in itself: the conflicting, constant, workaday life of the average superhero; and the more demanding, exhausting life of a young student working to put himself through college while trying to deal with love. The latter is a life we’ve all been familiar with, and the former is essentially what we go through in terms of mental battles, nightmares and trauma poured into lycra and sporting ridiculous monikers. As he swings from the Empire State Building and scoops up almost-alight kiddies to safety, the public still isn’t sure whether to actually like him: he’s a spider, darn it. 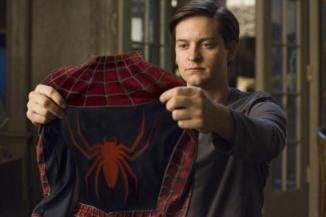 Spiderman Two opens with possibly the most brilliant recap of events in recent popcorn history: Danni Elfman’s striking score, cobwebs set against blood red, framing stunning Alex Ross illustrations of events gone by in the first film. By the time the credits end, we are reacquainted with a story we have not forgotten, and thirsty to see more. And Sam Raimi delivers. From the first shot, the film lays on Peter’s life being an actual embodiment of Murphy’s Law: Everything that can go wrong does go wrong.

After a breathtaking opening with Spiderman flying across madly to deliver Pizza in time, swinging in surreal CGI arcs with fabulous élan, there is a shot of Peter Parker struggling to exit the broom closet — brooms falling sequentially like persistent dominoes as he merely, clutzily attempts to just push them together long enough to squeeze himself out of there. This shot, of a superhero fast enough to dodge bullets and fists with unreal panache, being just a geeky little nervous kid, is worthy of standing applause and sets the tone for the film. Despite genetically arachnid superpowers and a rocking costume, Spiderman is well and truly human.

Cinematically, this is truly a commendable effort. New York is highly stylized, very affectionately — a visual ode to a beautiful city, loyal enough to evoke memories of the great Allen himself. Often, celluloid hats are tipped to masters of cinema obviously inspirational to Raimi, an eclectic selection of influences from the aforementioned Woody (I swear I could see a couple of Manhattan-style framings in there) to Martin Scorsese (as Spidey swings over the Goodfellas boroughs). The screenplay, contributed to by novelist and comic-book lover Michael Chabon, with dialogues crafted superbly by the award-winning Alvin Sargent, is outstanding, and forms a terrific core for Raimi to work around, but that shouldn’t take anything at all away from the director — this is totally Sam’s film.

When Peter Parker manages to get to the theatre on time, despite all odds, he is foiled by a snooty usher, played to utter, frustrating perfection by Bruce Campbell, reprising his cameo status in the franchise [he played the cocky wrestling announcer in the first part, plucking ‘The Amazing Spider-Man’ name out of thin air and throwing it around Pete’s neck] — a time when Raimi fans will nudge each other excitedly and yelp, ‘The Chin! The Chin!,’ referring to the nickname for the actor from the cult Evil Dead series. Sam Raimi, one of those Tarantinoesque movie geeks with a love for self-indulgent referencing, gives movie buffs enough to obsess about for months: a particularly obvious place to start would be to be the operating room scene with the dismembered arm and the chainsaw, a direct doff to Evil Dead II.

Tobey Maguire has done for superheroes what Tom Cruise did for fighter airplanes a couple of decades ago: given them life. A wonderfully talented young actor, Tobey breathes – awkwardness, humour, charisma – lovingly into Peter Parker, making him as real a protagonist as any. A couple of years ago, there were doubts as to whether his shoulders were strong enough to carry the Spiderman legacy — now he has made the role his own. There was injury-led speculation that he might not have done the sequel, but he did, and we are blessed. Kudos, Mr. Maguire, thanks for coming back.

The cast is deliciously accurate: JK Simmons brings J Jonah Jameson right out of the pages of the comic, and steals the show whenever he appears with consummate ease and great one-liners; the fantastic Alfred Molina makes a splendid Doc Ock, balancing unerringly the diverse requirements of focused professor, warm mentor, and mad scientist; James Franco, while not in a stellar role as Harry Osborne, does what is needed for his character to come away more positively this time around; and Rosemary Harris tackles the role of Aunt May so well that the only trite bits of speech in the script, destined to otherwise appear jaded, take on the mantle of sincerity, and she wields a feisty umbrella.

Spiderman Two is a really good movie. Not just a good superhero movie, for it is the best by far in the genre, but simply a wonderful bit of Hollywood summer cinema, a classically entertaining film setting Raimi on par with the Messiahs of Mainstream, Spielberg and Lucas — storytellers pouring forth action/emotion on the screen, using CGI demons as metaphor and giving us glorious moments of celluloid joy. The synthesis between the animated Spiderman and Tobey is indeed excellent, but the highlights are Doc Ock’s arms, which slither into a menacing life of their own.

Comic-book lovers will freak over this movie, for it is the parting of the red sea and the dawn of hope —  A delectable smorgasbord of references, allusions, and the finest written dialogue ever in the genre, hosting hundreds of tiny in-jokes fans will spend ages dissecting gleefully. But even for one who has never read a comic book, this is a truly enjoyable experience, a tremendous popcorn flick with heaps of humour, action, romance, SFX and eye-candy, and the one thing that sets a good film apart, leotards or not: a story that is really good. I simply feel sorry for those who do not like this film, for they have become too cynical to appreciate a story with heart.

There are parts in this film where Sam Raimi outdoes himself so completely we are awed into disbelief. There is a sublime, delightfully mature shot where Peter is offered romance, cloaked in chocolate cake and milk, and a moment where he almost says yes to the pretty, nervous landlord’s daughter, Ursula Ditkovich [a not-so subtle salute to Spidey co-creator Steve Ditko]. There is a touching, excellent montage where ‘Raindrops are falling on my head’ is re-contextualised with unbelievable panache, appropriately on the freshest-faced young talent since Butch Cassidy himself. There is more, but one could go on forever. Watch it.

But the true applause — one would say standing ovation but Mr. Raimi has ensured knees buckling — must be saved for the surprises. Weaned on massive hype, teasers, trailers, and reports of varying accuracy, I was confident this film had nothing that would shock me. I have never been so wrong, and fell conveniently for Raimi’s ingenious red herrings. After momentarily reeling with massive plot twist after other, I began to glimpse into the larger picture. Like the Wilde play Mary Jane acts in, The Importance Of Being Earnest, Raimi too is scripting a story in three acts — the groundbreaking revelations and the shattering veneer at the end of Act Two [while bringing up questions galore for Three], therefore, integral to the scheme of things. Can’t believe we have to wait three years.

The best part about having a director with a sense of humour is letting his audience get sucked into traps. During a fight between Spidey and Doc Ock, Aunt May is tossed up the side of a building, and she sticks her brolly out and hooks a ledge. This is such a painful cliché that we groan and are almost annoyed at how obvious this is, and just when we begin to get jaded with the predictability of the movie, Aunt May slips off.

And lands on a ledge, one foot below her, safe as ever. The umbrella tenterhook turns out to be suspense that never was, the theatre of the anticlimactic. Brilliant.

The build-up of the film, like the thundering claw-beats of Doctor Octopus, thuds into the heart harder and incessantly faster throughout the two hours. I have never been entirely supportive of Kirsten Dunst as Ms Watson, always advocating a vivacious, drop-dead gorgeous, Heather Graham-type instead, but she carries off her glorified damsel-in-distress role well in this film, and screams magnificently, justifying Raimi’s love for her. And, when at the end of the movie, she says the words — and these are words my Spidey-worshipping heart is mouthing incredulously, lines before she actually says them — “Go get ‘em, Tiger!”, my brain has an orgasm, the theatre explodes with ecstasy, and Spiderman Two climaxes into greatness.

One thought on “My first review ever: Sam Raimi’s Spider-Man 2”