“So if I lift it, I then rule Asgard?” Tony Stark doesn’t even take his jacket off the first time he tries to lift Thor’s hammer, a laughable attempt to prove — in Thor’s baritone — “worthy.” The party scene in all the trailers shows Earth’s Mightiest Heroes ™ throw down over drinks as they play the weirdest party game of all: Who Dare Be God. And while this is classic caped camaraderie, the superhero backslappery that shone through director Joss Whedon’s first awesome Avengers film, the true punch lies in Stark’s second line, delivered solemnly by Robert Downey Jr: “I will be re-instituting Prima Nocta.”

It’s a throwaway gag, like all of Stark’s quip-a-minute lines. He tries, fails, and the line is forgotten. But the very idea of Prima Nocta — a mythic medieval rule about a king or high nobleman having the rights to sleep with a newlywed bride before the groom does — almost defines Tony Stark’s hubris, his absolute sense of entitlement, his testosterone-y bravado, his intensely desperate need to be racing ahead of those around him, to do more, to see more, to control more. It is also, surprise surprise, the last allusion you’d expect in a kid-friendly Disney film featuring a bunch of good-natured superheroes — one of whom even tut-tuts at the others for swearing.

And that, ladies and gents, is classic Whedon, mixing up genre, style and appropriateness to concoct something so delicious it’ll leave you giddy. 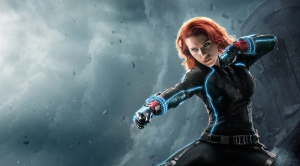 The film opens with a gobsmacking action sequence, one showing us every Avenger in action at the same time — stitched digitally together into a single-shot that instantly justifies the 3D glasses — and it never lets up. Unlike the first film which only really kicks into gear after the Beatles get together and start jamming, this sequel is the Magical Mystery Tour where the gang go from smash to smash, from one beautifully choreographed and clever set-piece to another. The action is constant — but that doesn’t, at all, mean you’re in for two and a half hours of things going CLANG! No sir, this is rock and roll revelry.

Because this is Whedon we’re talking about. Because in the middle of this mad comicbook epic, Iron Man and Captain America have a stare-down that is straight out of a Spaghetti Western, complete with the background score playfully riffing on Ennio Morricone. Because in a nightmarish sequence, a young Black Widow learns ballet and a tyrannical Julie Delpy, of all people, takes her apart. Because we see Banksy-like Iron Man graffiti all over a country that resents the Stark weaponry that tore it to pieces. Because Thor still corners the brilliant women-of-science demographic. And because — perhaps above all else, if you think about it — because it’s clear Tony Stark is getting older and a lot of his lines are now slightly pathetic bits of that’s-what-Stark-said innuendo.

It doesn’t show, mostly. It doesn’t show because of Robert Downey Jr and his majestically timed dry delivery and his ever-arched eyebrows — you can hear them bend even when he isn’t on screen and a couple of syllables hit us from afar, over the colossal noise of cities falling to the ground — and the wonderfully infectious glee with which he plays Tony as if his last name were Snark. But Iron Man knows the good times can’t last, and that he’s falling behind. There’s even a tiny pang of resentment in his voice when he says Captain America is the boss, the team-leader. Maybe that’s what leads him — and fellow scientist Bruce Banner — to create something that could save the world from the aliens, something that could think better than humans can. But you know as well as I do, fellow moviegoer, that stories about artificial intelligence don’t end well.

Thanks to Whedon, this one doesn’t even begin well. Ultron, a sentient intelligence voiced with sinister coolth by James Spader, starts off attacking the Avengers and continues to wreak havoc throughout the film: to save humanity you must first destroy humanity, and all that jazz. The Avengers disagree and there lies our film, a stunningly paced rollercoaster ride with such constant crescendo-ing — guitar solo after guitar solo, those lovely action scenes are — that it flies by quicker than we expect. It almost feels short, this huge hulk of a film. One badass moment shows up to trump another, and another. And so it soars, occasionally held aloft even by characters who are, improbably enough, just a day old. 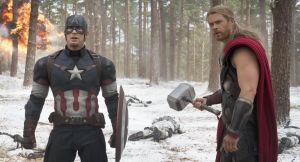 Chris Evans — following the excellent Winter Soldier — now wields the Captain America shield with impressive nobility; Chris Hemsworth’s Thor is underused but charming, mildly oafish but in the most awe-inspiring way; Jeremy Renner gets a lot to do as Hawkeye, from self-deprecatory monologues to pep speeches; new kids Elizabeth Olson as Scarlet Witch and Aaron Taylor-Johnson as Quicksilver are fun enough despite shaky Soviet-type accents, fittingly thunderstruck by the way the Avengers roll; and, finally, we have the film’s best performers, Mark Ruffalo and Scarlett Johansson, kicking ass in style, sure, but crucially making their characters work wonderfully together, two terrific actors playing off each other and even turning cliches — like an inappropriately timed bit of affection — into fantastic moments.

And, as in the first Avengers film, this movie lies in those moments. I won’t give much away for there is lots to discover here, big dramatic revelations as well as small nuggets to keep both casual viewers and hardcore fans very happy indeed, but there is one specific bit of casting I feel the need to single out here and applaud: for a certain portion of the film the Avengers spend time with a pregnant woman, and Whedon — oh TV-faithful Firefly-maker Whedon — casts the lovely Linda Cardellini in this role, in the goofiest of nods: who better to be surrounded by all these freaks and geeks?

Is this Avengers sequel, you and I both wonder, better than the first film? It might be and it might not. I like it more, but it doesn’t seem as universally inclusive as the first film miraculously was, but, hey, that doesn’t matter — neither of them is the the best Marvel film anymore. The goalposts have moved in the last three years, and the spaced-out weirdness of Guardians Of The Galaxy and the old-school political intrigue of Captain America: Winter Soldier — not to mention the grown-up grit of the Daredevil TV series — are where the bar now lies. The Avengers may not still be the best, but they are what let Marvel create the best and most ambitious comic movies. Just like Stan “The Man” Lee didn’t create everything amazing at the House Of Ideas, Whedon isn’t spearheading all that is special at the House of Mouse. But it is the house Joss “The Boss” Whedon built.

I called that first Avengers hit a hero-sandwich, and this is certainly dessert. I, for one, still haven’t been able to wipe the pixie-dusted grin off my face. It does what the best summer blockbusters do, the larger-than-life megamovies that drop our jaws in theatres: it indulges our fantasies and makes kids out of us again, kids who want to play with our toys and who have fun watching the director play with his. (If in doubt, just leave a giant hammer outside the theatre exit and see who doesn’t try to pull at it.)

The Avengers: Age Of Ultron may well be a mainstream milkshake of a film, but it is one of those madly indulgent shakes — featuring Snickers bars and dark chocolate sauce and gourmet coffee and spiked with a few swallows of something decidedly adult. Something that’ll keep you giggling and energised and awake far longer than it should.

As Tony Stark would say about thousand-year-old whiskeys, drink up.

One thought on “Review: Joss Whedon’s The Avengers: Age Of Ultron”