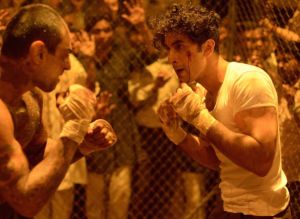 There are some filmmakers who scoff at the very notion of historical accuracy — like Oliver Stone or Quentin Tarantino — and Anurag Kashyap is one of that bunch, a man who prefers to create his own sumptuous version of history. Bombay Velvet looks to be, then, his very own Bob-Fosse-meets-Scarface take on what might have been, instead of bothering with what really was. An indicator of the same lies in the opening credits, as they claim to be “introducing Karan Johar” whereas that particular director first acted in the most successful Hindi film of all time.

Not on Kashyap’s watch, he didn’t. And that’s perfectly fair. We look to big, brassy cinema not to educate but to entertain, and let us not seek verisimilitude in this kind of cinematic explosion. And this Bombay Velvet is an obviously shallow film, an all-out retro masala-movie with homage on the rocks and cocktail-shakers brimming with cliché. It is a take on the nostalgia soaked groovy-gangster movie: Once Upon A Time In Kashyapistan.

On paper, this sounds like dynamite. Kashyap, a gifted visual stylist and a distinctively bold storyteller, taking on the mainstream and riffing on it his way, subverting the system. Except, um, that’s not what happens here. There is surprisingly little subversion, but that’s fine too, provided the result is compelling on its own steam. Alas, Bombay Velvet runs out of breath less than halfway through, and huffs and puffs as it tries to breast the finish line.

The new film clearly wants to be many things — noir, grand romance, a Broadwayesque musical, Prakash Mehra, Brian De Palma — but ends up indecisively skulking around the shadows of giant films, despite editing goddess Thelma Schoonmaker blessing it with her scissors. Several components work strongly, particularly a sensational soundtrack and a few excellent male actors, yet the film disappoints, and, due to the potential on display, severely so. The scale is amped up to grandness, certainly, but despite majestic intent, what we find here is a watered-down forgery, an imitation you can spot from a mile away: this Dahlia is barely Black-ish; the cloth muffling this revolver isn’t the real thing but merely velveteen.

There is much promise of magic, especially as the film begins. A raffish crook watches The Roaring Twenties, and, too weak in English to recite James Cagney’s lopsidedly-delivered lines, settles instead for the film’s famous last words, pointing a kerchief-covered finger at the mirror and saying Gladys George’s line about how her dead flame “was a big shot”, thus recreating a voiceover instead of playing a role — ironically making a wish and jinxing himself all at once.

Johnny Balraj is a character with character, a zoot-suit wearing tomcat with his eye on the prize, and Ranbir Kapoor plays him with slithery elegance. Spry as if eternally scalded, Kapoor glides restlessly through the film – hitching rides from people, situations and passing buses – without a second thought, forever sidling away from the real, the nitty-gritty. Balraj masochistically spends his nights TylerDurden-ing inside a steel cage (a la Amitabh Bachchan in Naseeb) and there are times the preternaturally talented Kapoor absolutely shines: a scene, for example, where he leers wickedly and stubbornly (but far from lasciviously) at his girl, while a tailor measures her bust, is priceless.

Balraj rides the coattails of Kaizad Khambatta, a sinister media baron with his nimble fingers in many oily pies. Karan Johar is a revelation as this character so obsessed with his all-powerful, all-controlling image that — in the film’s brightest moment — he steps out of a room in order to have himself a good giggle. The film ostensibly mirrors some tabloid duel from back in the day (Khambatta is once referred to by the rival tabloid as “a fruitcake!”) but real-life parallels can’t save a boring plot.

The striking production design and nudge-nudge-wink-wink Bombay allusions are merely window-dressing, though. This film suffers from fundamentally flimsy storytelling. Not just is it spelt out how some strips of negative hold the key to Bombay itself, but we’re shown how breezily (and even comically) said negatives were acquired, and they matter only because the film doggedly insists they do. It never feels vital enough. For some reason Bombay Velvet seems firmly opposed to the idea of mystery, showing off a weak McGuffin right at the start and later, after an explosive twist (albeit an obvious one) we are flashed that card too, in the very next scene. Robbing the audience of surprise isn’t the smartest idea for what turns out to be a predictable film.

Neither is it wise to entrust so much of Bombay Velvet to the earnest but woefully miscast Anushka Sharma, a fine actress entirely out of her depth as a stage-conquering crooner. She lacks the presence and vivacity, and it takes just two scenes featuring Raveena Tandon singing on stage — think Bianca Castafiore turned sexy — to show us the difference between prima donna and pretender.

Satyadeep Misra is terrific as Balraj’s best friend, Chimman, a loyal pragmatist who, unlike Johnny, looks before he leaps. Misra delivers a consistently measured performance, and his body language is masterful. A scene where Johnny and Khambatta trade platitudes has Chimman casually but forcefully motioning that the money be fixed on first, and Misra manages to convey, through one flick of the fingers, both the fact that he knows his place and that price matters more than place. The infallible Kay Kay Menon plays a police detective, sharply turned-out in a hat and high-waisted trousers but is given silly clues to smile at and decipher, and a laughably bad final scene. Quizmaster Siddhartha Basu shows up looking suitably authoritative and officious in that way that often accompanies ruthlessness, while Vivaan Shah bumbles around with a moustache, looking for all the world like a young Kader Khan.

There is a lot happening, all the time. Yet, after a while, as the corpses pile up – with increasing meaninglessness — and the Tommy guns appear, it all ceases to matter. Everything, it appears, can be solved by murder. This might sound like heresy, but even that awfully cheesy Once Upon A Time In Mumbaai movie had characters worth caring about despite the moronic dialogue they recited; Bombay Velvet has the skills but makes it awfully hard to feel anything for guy, girl or the world they’re in. With no true stakes, the film plods messily along to a climax that feels emotionally unearned and interminably stretched.

One song, however, makes time stand still. Amit Trivedi’s superb soundtrack comes to us mostly in snippets mimed by stage crooners, but, for one devastating moment, Bombay Velvet gives way entirely to let a song called Dhadaam Dhadaam take the stage. An emotionally overwrought aria — complete with black tears brimming down kohl’d cold eyes — the song transcends the film and strikes operatically at the heart. Both movie and audience hold their collective breath, and despite the tedium that follows this track, this cinematic sucker-punch is enough to remind us of Kashyap’s potent flammability. Too bad the rest of the film doesn’t really sing — or singe.