Why is Mastizaade not in 3D?

I’m stunned that the producers of this insanely exploitative flick missed out on a cheap trick that obvious. For this is a pointedly stupid film, a sloppily written paean to horndogs, a work of juvenile perversion. A hundred-minute excuse to stare at a woman while constantly eating bananas, Mastizaade is a confused, unfunny, and ultimately impotent disaster.

But let us first get things straight. When I call it exploitative, I don’t mean the film’s makers take advantage of leading lady Sunny Leone — to the contrary, this is an absolute star turn from her and she is always, unmistakably, holding the reins. But more on that in a bit. What Mastizaade does is shamelessly and pathetically prey on a certain repressed section of the audience, by serving up an unforgivably braindead offering designed to appeal to their basest instincts. Naturally the makers will take the age-old Pablo Escobar excuse — that the very demand for a product justifies its manufacture and sale — but we should all know better than drug-traffickers, one hopes. 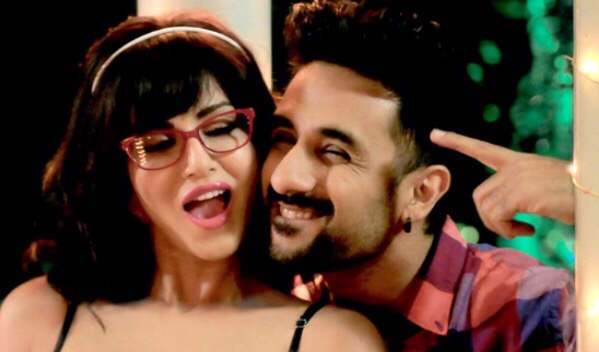 Look, there’s nothing wrong with stupid films. Or, heaven forbid, with sexy films. Or films that delight in being a cross between the two. Yet if such objects to arouse pre-pubescent sweat must be made, why can’t they be funny? Why can’t there be one decently crafted joke? Why can’t there be real characters or a real story? Surely even cleavage-obsessed filmmakers ought to, at first, be filmmakers, yes? So, dear randy directors-to-be, why can’t you loyally remake Porky’s or the Carry On movies or simply, in a take on American Pie, let some kid diddle a dhokla?

One of the fundamental problems with Hindi sex-comedies (or porn-coms or whatever they are calling themselves now) is that nobody really has sex, they merely nudge and wink enough times to give Eric Idle a hiccuping fit. Milap Zaveri’s Mastizaade kicks off with two willing young girls leaping onto ‘heroes’ Tushhar Kapoor and Vir Dass, but there is no kissing or fondling — instead of making out, both sets of couples accost each other like epileptic mimes. This flaccid amateurishness runs through the whole film — it isn’t ballsy enough to get dirty but it wants to use a few dirty-sounding words.

The film is about two boys who — in a blatant bit of product placement with tragic implications for the brand involved — wear Lawman Jeans to prey on women in rehab by getting them drunk. Dass gamely goes through the motions even while visibly trying to distance himself from it all, impressively managing to look detached even when sucking on a lollipop. There is no such restraint on the other end. Kapoor, an old-hand at the innuendo-filled genre, is painfully desperate to plunge into the madness, and we should all read something into the fact that his character is, oddly enough, named Sunny.

Sunny herself, who plays oh-so-creatively named twins Laila and Lily Lele, is an absolute star. Mastizaade doesn’t feel like a real film till she shows up, all glamorous and grinning and completely in-on-the-joke, more even than the director. Her mock-horrified expressions are priceless, and even when dancing along to a song that tastelessly appears to abuse her by co-opting the Punjabi word for ‘more,’ she’s the one taking control by joyously leading the jig. Leone commits to the parts and campily plays up to the camera, and — while this may appear exaggerated considering the rest of this film’s cast — her screen presence proves to be striking and, more importantly, bright. Here is a girl acting sincerely in an utterly idiotic movie, sure, but it’s great to see such a self-aware turn — she even mocks the infantilization of the male gaze by cocking a snook at her own hit Baby Doll — and to watch Leone visibly, and infectiously, having fun. Properly directed, here’s an actress waiting to impress.

Alas, to nobody’s surprise, nothing else works. Zaveri, who casts himself as a Pattaya pervert, appears to be flaunting his methods when he autobiographically shows his leading men make trashy, tawdry advertisements — ads that sell substandard products by thrusting sex and double-meaning in our faces — but there is little to buy into here.

One of the songs in the film is phrased oddly enough for me to respond to it personally. “Dekhega raja trailer ki picture dikha doon?” translates to “Will Raja watch the trailer or should I show him the whole film?” and I don’t quite know why this is made to sound like a threat — but it is a realistic one, as evidenced by my throbbing temples, and I gladly say Uncle. Next time let the trailer be all I see. Please.

What people who make movies like Mastizaade need to realise is that the word Adult means more than a movie rating. Even the absolute daftest of sex comedies have room for something sharp and clever and cheeky. Because Austin Powers minus the groovy is just pervy, baby, pervy.