Error: Twitter did not respond. Please wait a few minutes and refresh this page.

Skip to content
Press Enter / Return to begin your search.

This isn’t your daddy’s Jungle Book.

That applies whether I’m your daddy’s age and grew up on an oft-looped VHS tape of Disney’s 1967 animated classic, or if you’re my dad’s age and cherished the leatherbound Rudyard Kipling book which promised darker truths – though I choose to believe that Bare Necessities may well be as deep as life gets.

No, Jon Favreau’s new film is – ideal for these times low on imaginative fuel – a hybrid. Here’s a reboot that runs refreshingly on the spirit of both Disney’s film and Kipling’s classic, making for a rollicking and dramatic ride. There are no harrumphing Hathis, no brown smurfette who proves climactically irresistible – a moment that always hurt me bad. There is, instead, a stunning new world, a phenomenal young Mowgli, and a narrative that sucks you in, hard. And yeah, it uses Bare Necessities to perfection.

Visually, it’s hard to find a parallel to what Favreau has accomplished with The Jungle Book, but here, I’ll take a shot: think back to Mad Max: Fury Road director George Miller’s 1995 film, Babe. That had a photorealistically rendered talking pig, and now – more than two decades later – we have the resources and the budgets to summon a world of woodland creatures who smirk and wink, a jungleful of relentlessly industrious gibbons and snarky squirrels. So yes, a George Miller film on steroids: now that’s saying something – and boy, does Favreau deliver.

The scale and the detailing is astonishing to behold, so closely feeling like childhood dreams of talking tigers that they promise to turn you, o jaded member of the audience, into a half-panted pre-pubescent with an awestruck, floorbound jaw. Therefore, with you as a breathless part of the narrative instead of a distanced bystander, the thrills that approach are made more urgent, more elemental. Just like the sound of a child on all fours, face to the clouds, howling like a topper in a classroom of wolves.

Which, of course, he is. 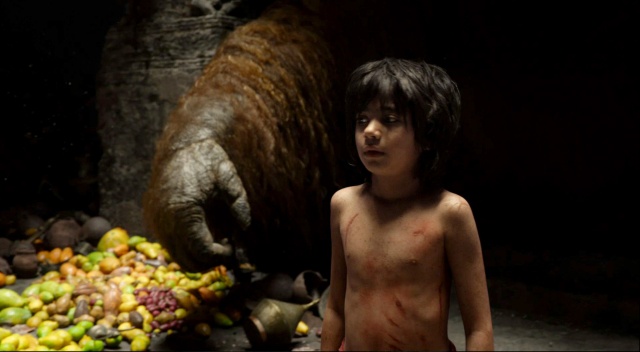 This child, Neel Sethi, is an exceptional find, a scrappy and adorable one who gets the messy and marvellous Mowgli vibe just right. Favreau’s film gives Mowgli a less assured but more charismatic personality than in the old cartoon – to me it felt like the ethos had moved from that old Disney cartoon to a 90s cartoon like Disney’s Aladdin, the new Mowgli being a lot more “riff-raff, street rat” – and he’s terrific. The all-star cast voicing the animals in this film is a mouthwatering one, and the thought of this talented runt matching them — while acting almost entirely in green-screen, mind you — is an incredible one. This may be the finest performance by an Indian actor in a recent foreign film.

That cast, though. My God. Stripped of his characteristic self-aware irony, Bill Murray is superbly affecting and emotive as Baloo the bear, rejuvenating a character all kids deserve to have around. Christopher Walken’s King Louie – here a gigantopithecus instead of an orangutan – is absolute Walken, demanding fire one minute and, another minute, looking askance at the use of stolen words. (Baloo, on the other hand, has no trouble calling the monkeys ‘Bandarlog,’ or, in the film’s finest line, referring to something Mowgli considers sacred as something, well, not. Wait for it.) Lupita Nyong’o, as wolfmother Raksha, conjures up tremendous intensity, particularly when telling Mowgli that he’s hers (“You’re mine to me,” she commands), while Scarlett Johansson’s Kaa has but one crucial moment and, man oh man, when it comes to hisses, nobody does it better.

As all these films now do, The Jungle Book is filled with amusing vocal cameos, but few feel as perfect as the late Garry Shandling, that bristliest of comedians, showing up as an annoyed porcupine.

It is, however, the king of the jungle who leads the pack. I fall deeper in love with Idris Elba’s voice with each syllable, and his Shere Khan is a creature of magnificence. With all the swagger of the villain in a Western, this commanding Bengal Tiger arrests our attention in the strongest fashion, with Elba snarling out each carefully-chosen word in a ready-to-pounce way that makes it feel it may be the listener’s last. What immortal hand or eye, indeed.

The story is familiar – the tale of a reluctant man-cub being escorted to a village – but thanks to the overwhelming visuals and the compelling narrative, I found myself trying to will the next scene on, wanting hungrily to know what happens next. There is much magic to be found in this film, from the moment we see a giant snakeskin discarded imperiously over a swathe of forest, to one where a little boy with cherry-red pyjamas reaches out to prod a panther’s gums.

Yet it remains the stuff of childhood lore. Favreau has borrowed enough from the animated film to make his story sprint strongly through his fantastically-foliaged new world, but us old fans will always want more. I, for instance, could really have done with four Liverpudlian vultures nudging each other and wondering what they’d like to be doing, but ah – the films of Favreau are all about keeping hope alive, and there is much room for such plans to come together in the sequel.

Take the kids you know (and the kid within you) and go watch The Jungle Book. Trust in me.

One thought on “Review: Jon Favreau’s The Jungle Book”